We build meaningful and lasting relationships by consistently delivering high quality projects with clear communication and integrity.
. . . .
Be Remarkable
. . . .

We celebrate the milestones of being more than two decades strong in business;
with second generation ownership reaching a 15th anniversary in 2021! 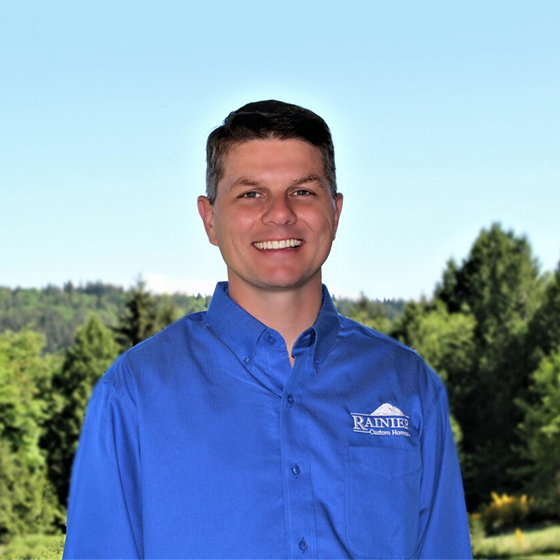 Jason grew up in the Seattle area. He comes from a long line of contractors and craftsman. He grew up working construction alongside his father Jason G Jarman. Jason has a Bachelors Degree in Architecture and a Masters Degree in Construction Management from the University of Washington. He worked as a carpenter early in his career and then as a purchasing agent for a local home builder, Murray Franklyn. He later managed the company’s customer service department. Jason left Murray Franklyn to assist in the start-up and operation of a new and exciting local builder, The Dwelling Company. Jason ran multi-million dollar projects as a project manager and partner. His expertise in design, customer care, and cost/budget control as well as his long term relationship with many of the best local subcontractors helped him be an integral part of The Dwelling Company’s success. In 2004 Jason started Sunstone Homes and merged with Rainier Custom Homes in 2006. 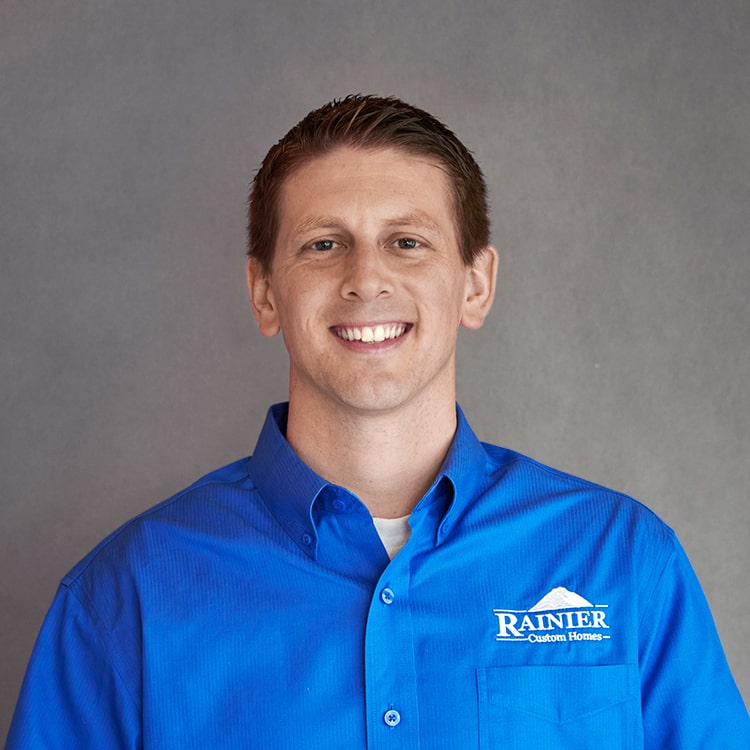 Michael grew up in the Seattle area. He has had the opportunity to work in the construction industry most of his life. First, early on, while helping his Dad, Jason G Jarman, start and grow Rainier Custom Homes. Then, from 2006–2010 Michael worked for several companies deftly managing sales and marketing; developing strategies and training programs. Michael received his Bachelors Degree in Construction Management from Brigham Young University in 2010. Upon graduation he joined his Dad and Brother here at Rainier Custom Homes. Today, Michael is one of the first people that you will meet with, to discuss your build project.

Steve was born and raised in Northern California. There he raised live stock and managed a 3000 tree apple orchard with his father until he enlisted in the US Naval Submarine Service in 1984. While still in the Navy, Steve launched his own construction company, Dutch Built Construction. In 1992 Steve was honorably discharged from Naval service allowing him to focus his energies toward expanding his own company. In 2005 Dutch Built Construction merged with another company and became RESCOM Developers, Inc. In 2007 Steve’s oldest daughter experienced some serious health challenges so he sold his interests in RESCOM which had expanded to 33 states. His daughter is now doing great. Since 2009, Steve has played a major roll in the successful growth and expansion of three other companies as a senior executive. In January of 2018 Steve was hired by Rainier Custom Homes as Senior Vice President with the plan for him to run the company in the future. By September of 2018 Steve was promoted to CEO here at Rainier Custom Homes. Steve’s mission as CEO is to carry forward and expand the Remarkable culture and quality custom home construction experience created by the Jarman Family for their team and their clients over the past 25 years. 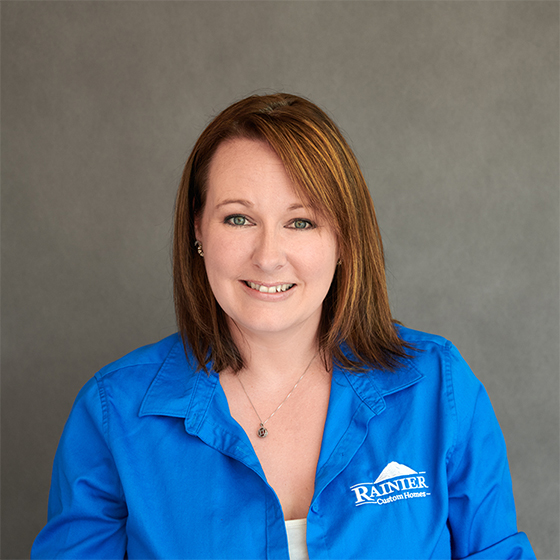 Danielle was raised on the Kitsap Peninsula as well as on her family’s ranch. She grew up in a construction family and started her working life as a flagger in the field. She quickly realized the benefits of organization and communication skills. Her professional background is in Office Management and business. She has managed businesses in not only the private sector but also county government. Her professional interests focus on maintaining a organized, customer based position, in a company that has remarkable values and respect. She has found such a position in 2020 as Executive Assistant for Rainier Custom Homes.. 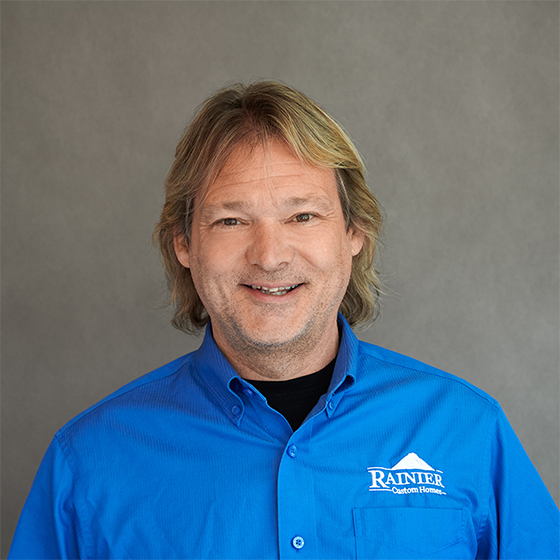 Nevin brings 25 years of business ownership and 13 years of custom home construction experience to his role as the VP of Pre-Construction for RCH. His early working years as a Journeyman Steel Fabricator eventually led to a management role in the steel construction industry. Nevin has enjoyed over 18 years of success coaching the minor sports of Hockey and Lacrosse. Guiding his teams to many trophy and medal victories during that span. It is his love of competing and teamwork that has enabled him to achieve successes in the workplace. Living a healthy lifestyle and not afraid of a challenge, Nevin joined a volunteer fire department and became a firefighter EMT in WA in 2016 after successfully passing his Firefighter National Candidate Physical Ability Test. A test that few take over the age of 50. Currently residing in Seattle and enjoying time with his family, Nevin looks forward to working for and growing RCH into one of the North West’s Premier Builders. 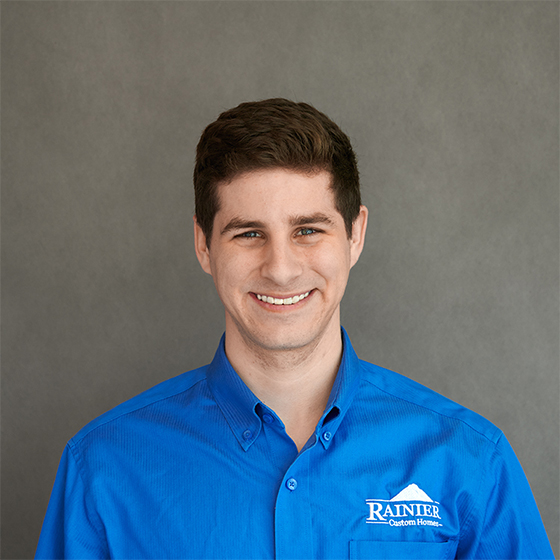 Jason grew up in the Seattle area. He grew up working construction for his dad Jason C. He was going to school at Brigham Young University-Idaho for Business Management. He moved back to Washington in late summer 2020 to work for Rainier Custom Homes. He is currently enrolled in Renton Technical College working on his Construction Management Certificate. Because of the work he has done with his dad and Rainier Custom Homes he has learned to focus on the details and be organized. As your project engineer in the Pre-Construction Department, he works to make sure your project achieves your goals. 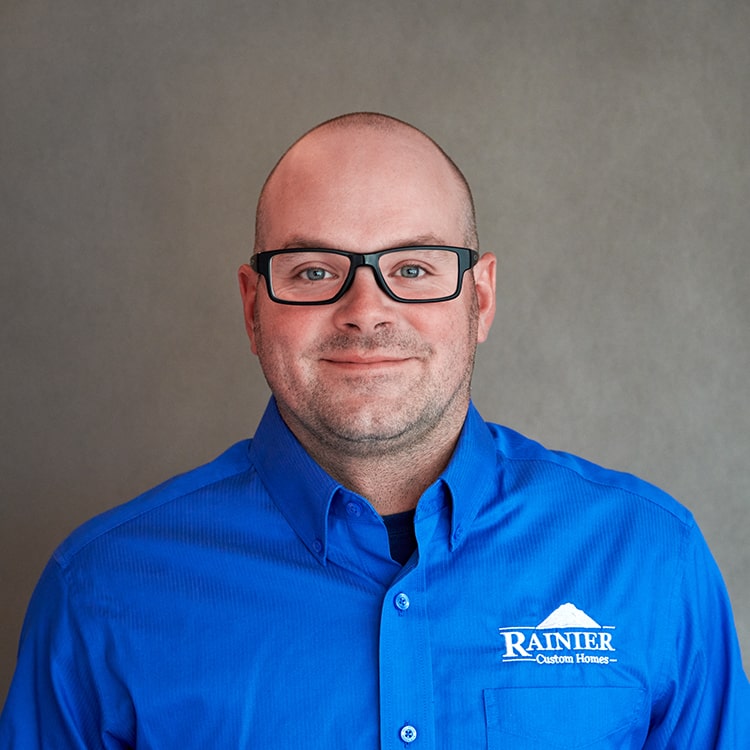 Mike grew up in University Place, WA and was a graduate of Curtis High School. He has a 10+ year background in construction with an emphasis on finish carpentry work. Mike has worked both residential and commercial construction including two years working for a contractor that worked for the Department of Defense, with work performed on JBLM, Seattle Coast Guard Station and Bangor Naval Subbase. Before settling into a career in construction Mike worked in the snow sports industry for multiple years managing retail snow sports shops. Mike currently resides in Tacoma with his family and has no plans of leaving the area, or the construction industry for the foreseeable future. 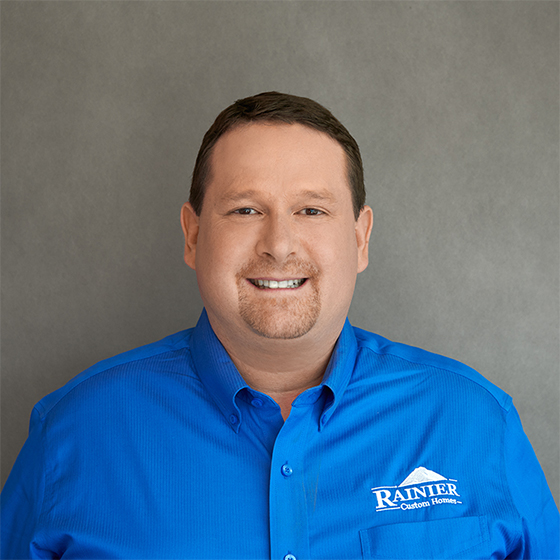 In April 2021, Robert Elliott became a project manager with Rainier Custom Homes. Originally from Eastern Washington State, construction has been a part of Robert’s life from an early age. As a boy, he would put sticks in his belt (his tools) and go off to the next job with his dad. As an adolescent, Robert got the chance to work in construction for real. It was here that he learned the value of great customer service, the meaning of hard work, and felt the pride of creating a home. After earning his Associates in Business from Weimar College in California, he obtained a framing position with a Seattle-area home builder. Working his way up to plat superintendent, Robert managed new home construction projects in Pierce, King, and Thurston counties. Building on this experience, Robert also managed the purchasing/estimating, as well as architectural departments for another home builder. In his free time, Robert enjoys spending time with his wife, Tiffany, and their two boys, Michael and Caleb. Robert is proud to be part of the Rainer Custom Homes family, continuing the tradition of providing distinguished, quality homes. 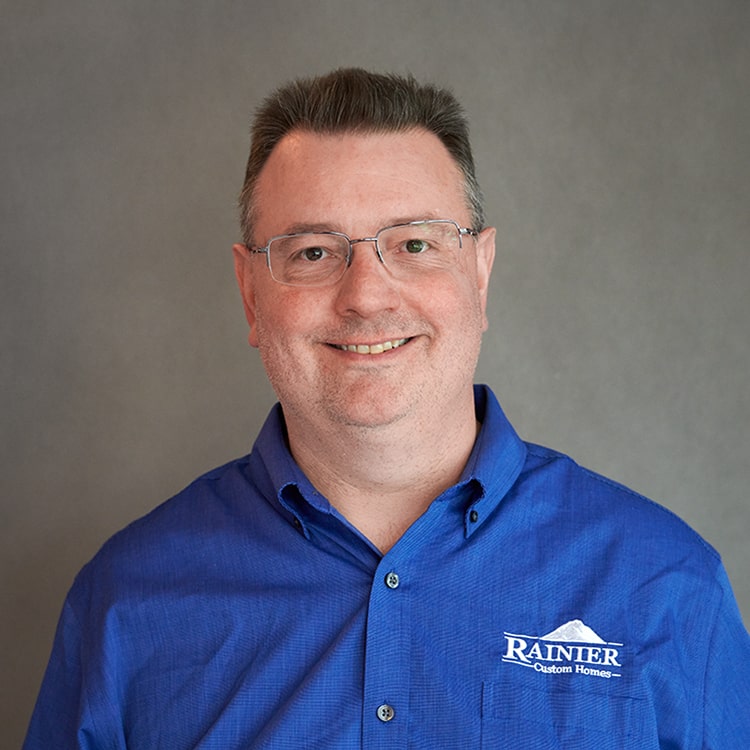 I have worked in the construction field very early on. At age 6 I was commissioned head nail puller/ straightener, from there I have moved up to framing and other related jobs. In 1992 I joined the Army and did 6 years as an Engineer with the 864th Engineer Bat., 2nd Infantry Div., and 101st Airborne Div. Where I learned the earth work and leadership portion of my experience. I since have been working in residential construction, tract and custom homes then branching into Tenant Improvements as well as larger commercial shell projects. I now have a Certificate and Associates degree in Construction Management. With this knowledge I will further my ability to help the growing construction industry. 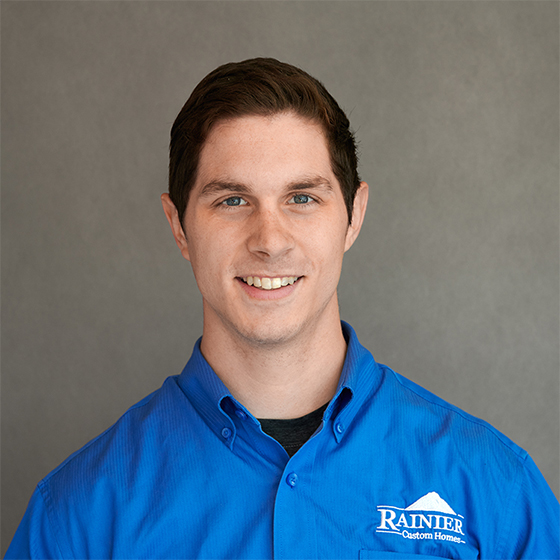 Joseph grew up in Renton Washington and has been in construction all his life. He comes from a family of successful construction business owners. He works alongside his brothers Jason A and Charles, father Jason C, uncle Michael, and grandfather Jason G. He is happy, optimistic, and always willing to help. 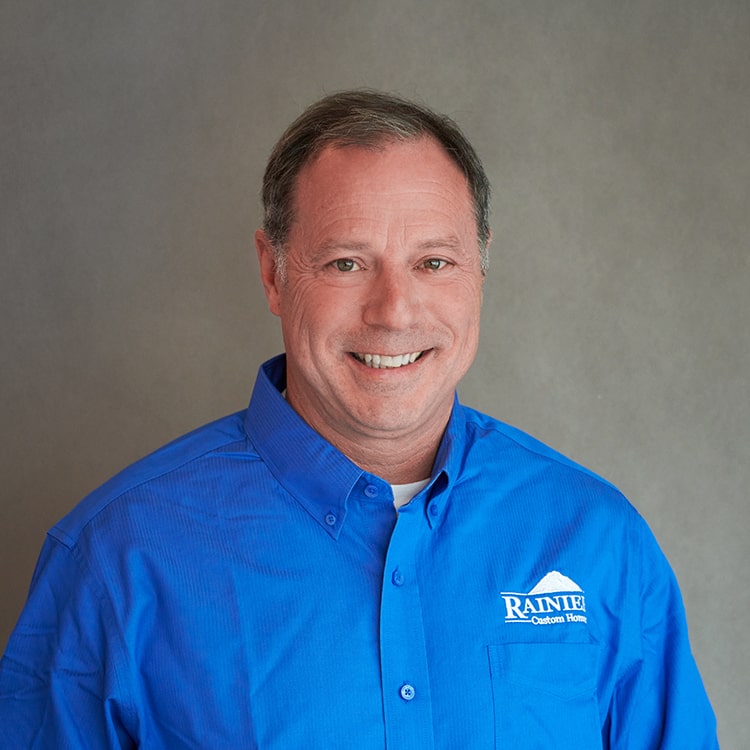 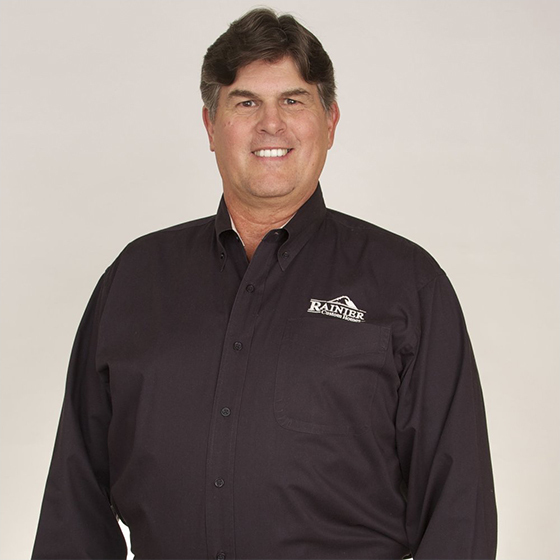 Jason grew up in Utah. He worked alongside his father as a journeyman iron worker installing steel in large commercial and civil projects such as dams and bridges. He later started a family owned business, Mer-Can Manufacturing wherein, he oversaw the assembly, packaging and the shipping of the wood burning appliance line. He was also involved in all research, development and patenting of products, as well as running all display booths in national hardware shows. He later worked as general tradesman for a local General Contractor doing all phases of remodel work as well as some new construction. In 1994 he started Rainier Custom Homes. Today, Jason considers a successful construction project standard to include kind hearted and warm relationships between himself and clients.